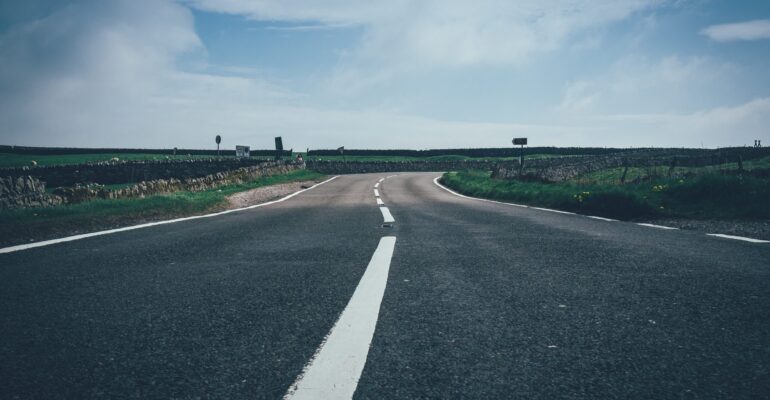 Often a time, people find themselves in very unpleasant, sometimes dangerous situations they think they cannot get out of. They believe that if they do anything to try to change things, something very bad will happen. This is when the “What happens next?” method is absolutely necessary.

In most cases, this very bad thing, is not abstract; it is a definite outcome which is so scary to imagine that they don’t even want to talk about it. In others, they think that the worst will happen without even taking the time to think what “the worst” might look like.

At the thought of that outcome, they hit a wall they can’t see past. It’s as if life stops at that particular point. Their brain shuts down. They can’t even imagine what might happen next. They literally feel that the world will end.

What is impressive is that, although people’s minds tend to think (or worry) about the future making scenarios almost all the time, this is the only case when they can’t think about the future at all. The imaginary horrible outcome is “the end”.

The universal law of endless possibilities

People in such a state of mind forget the universal law of endless possibilities.What is more, they don’t see that their action won’t necessarily lead to that one and only outcome they are so terrified of but that there could be countless possible outcomes.

As a result, they cannot see that their “action” and change will not necessarily lead to what they are most afraid of but, even if it does, that it is not a dead-end. Life does not stop there! Life goes on!

The “What happens next?” method

To help them see that, I use what I call the “What happens next?” method. I have them think about hypothetical situations and ask them what they would do next.

Here’s two examples of the what happens next method:

“I don’t want my mother to die”

Here’s a dialogue with a client who just came out of a marriage with a narcissist after a series of relationships with men that fit that profile. We were trying to determine why she “attracts” such people in her life and then why she “puts up” with abusive behaviors. When I asked her where she had learnt this pattern of behavior and why she thought that, if someone “loves” us, we have to accept unhealthy and hurtful behaviors in order to save the relationship, everything pointed to her mother…

– Tell me about your relationship with your mother.

– Oh, my mother infuriates me! I cannot stand her. She always attacks me with unjust and false accusations.

– I am my mother’s “punching bag”. Whenever she’s angry, frustrated or upset at anything, I have to go and see her so she can take it all out on me; so that she can vent by accusing me of things and of behaviors I am innocent of.

– What do you mean you “have to” go see her when she’s in that frame of mind?

– She calls me, she accuses me of something and she asks me to go see her.

– If the accusation is false and if she has made a habit out of doing that, why do you go and see her? Why don’t you just avoid her until her anger blows over? Why do you have to take your mother’s “punches”?

– Every time I try to avoid this situation by leaving her house or by hanging up the phone, she will text me that she has had enough and that she will end her life. She says that she will stop taking her medication and her treatment altogether (her mother is a cancer patient). I have been living with this fear, that is, that she will kill herself, all my life. Before the cancer, she would threaten to throw herself under a car or jump off the balcony.

– What makes you think that she will carry out her threat?

– I don’t know. She says she will and I believe her.

– If she truly decides to end her life, if she doesn’t want to pursue her cancer treatment any more, how can you stop her? How can you make her take her medicine or go to the hospital to receive the chemo?

– So, what you are saying is that, if your mother really wants to die, there’s nothing you can do to stop her.

– Let’s just say that the next time she “summons” you, indirectly asking you to become her “punching bag”, you refuse to go. You just ignore her and her texts and you go for a walk. What happens next?

– I don’t know, she might eventually stop the treatment or jump off the balcony and kill herself. I can’t even think about it.

– Let’s say, for argument’s sake, that you don’t go see her and you ignore her calls and texts and two hours later you get a call from your father crying and screaming that he found her unconscious on the bed with empty bottles of pills next to her. What happens next?

– How are you feeling at that point?

– I’m not feeling anything. I’m just waiting for the paramedics to either resuscitate her or declare her dead.

– Let’s say, they declare her dead. What happens next?

– I make all the arrangements with the funeral home and all the administrative work that has to be done.

– Let’s say you are at the funeral home. You can see your mother dead in her casket and you are attending the service. How are you feeling?

– I have no feelings. I am just there.

– Who are you blaming for the death of your mother?

– I’m not blaming anyone. It was her decision.

– What happens next? Let’s say, 3 months after the funeral. How has your life been affected by your mother’s death?

Being at peace with the situation

– It hasn’t been affected actually. I get on with my life. I’m surprised to admit that I feel a little relieved.

– Carrying the burden of feeling responsible for my mother’s life or death. I can concentrate on how I live my life and on my personal choices from now on.

– Making sure I help her whenever she needs my help; take her to the doctor, to her chemo appointments, getting her medicine and give her all the practical help she needs. But I won’t be her punching bag any more. That’s not my responsibility.

Needless to say, her mother didn’t jump off the balcony nor did she stop her treatment. My client is now learning how to live a life free from emotional blackmail. She can now see clearly what she can or cannot do and what she is or isn’t responsible for. We are currently working on attracting the right life partner for her.

Here’s another, less dramatic example, of the “What happens next?” method.

“I don’t want to die homeless”

This time around, I am working with a client who is in an abusive business partnership. Her business partner takes advantage of her and her work and does not give her her fair share of the profits. She won’t speak up for fear the partnership dissolve as she sees that as “the end of the world”.

– So, you are frustrated because your business partner is stealing from you.

– Yes, I feel frustrated and angry.

– What have you done so far to make him stop and give you back everything he has stolen?

– I haven’t done anything.

– I’m afraid that, if I say something, one thing will lead to another and the partnership will fall apart.

– Ok. Let’s say that the partnership falls apart. What happens next?

– Oh, no! Don’t tell me that the partnership will fall apart. It can’t fall apart! I can’t take it! I can’t even imagine it!

– My livelihood depends on it!

– I see. Your livelihood depends on this partnership. Let’s say, though, that the business partnership does fall apart. What happens next?

– I will die if it falls apart!

– Ok. What do you see happening next? How exactly will you die? Describe your “death” to me.

– The partnership has fallen apart. What happens next?

The “What happens next?” steps

– I can see myself putting all my staff in cardboard boxes and leaving the office.

– That’s good. What happens next?

– I go home and start making a list of all the people I could call asking for a job and I start calling and emailing them.

– Well, plenty of people have asked me to either work for them or with them in the past. I’m sure some of them will still want me.

– That’s good to know. But I want you to imagine the worst case scenario. Let’s say that none of them offers you a job and you can’t pay your rent. What happens next.

– First, I call my sister and I ask her to put me up for some time, until I can find a job and stand on my own two feet again. I know that eventually I will find a job. I am good at what I do!

By that point, my client was glowing. She knew that she wouldn’t “die” whatever happened with the partnership. She was ready to confront her business partner, which she did. The partnership did fall apart and my client ended up starting her own business. Later on, she confessed to me that, although she earned a little less than she did before, she felt great! She knew that she could earn a lot more in the future and, even if she didn’t, the feeling of freedom that she experienced being on her own was worth a small decline in her revenue.

Always ask yourself “What happens next?”

Next time you feel petrified thinking of a “certain” outcome should you need to take action or change a situation that is no longer working for you, ask yourself “What happens next?”. This will help you tear down the imaginary wall of the dead-end and give you a glimpse of what is possible.

If you need help with that,

Photo by Greg Willson on Unsplash