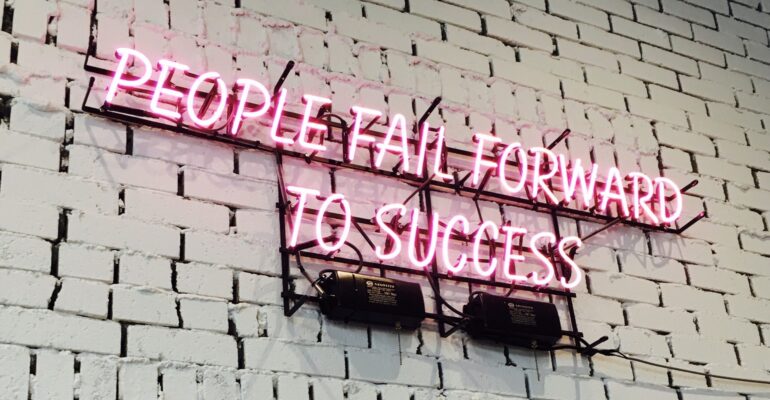 Inspired by clients and sessions again, I would like to talk about failure.

So many people are terrified at the thought of “failure”. So much so, that they feel paralyzed and they actually do nothing lest they might fail.

Brilliant people, exquisite minds, just do nothing. They watch the world move forward from the “comfort” of their inaction. They see other people succeed, people that might not even be as talented or charismatic, and they ask themselves “How do they do it?”.

When they come to me for help seeking the courage to get out of their “comfort” zone and pursue their personal and professional accomplishment, they talk about the fear of failure and the absence of courage when, in fact, they could bypass or trick their fear by just changing their vocabulary.

The word failure is such a scary word for so many. Judging from their reactions when we talk about it, to them it is equivalent to death. I have seen clients quiver and almost have panic attacks when I ask them to describe what failure is or what the consequences of failure might be. Mind you, the consequences are not as bleak as they present them to be…

Words are the carriers of energy. At the same time, the words we use condition our brain.

It has been some time now when I realized that that the word failure does not accurately describe any situation.

There is no such thing as failure!

Failure is the byproduct of expectations. Expectations of a desired outcome which in most cases does not depend entirely on us.

Science advances by trial and error and so does life. Scientists have expectations too but they know the might not get it right the first time. Scientist are curious to see the outcome of their experiments so that they can use their findings to go further next time. Every time they do something differently, they call it another attempt.

That’s why I teach my clients to substitute the word failure with the word attempt.

Because, at the end of the day, that’s what every endeavor is: an attempt.

So next time your endeavor doesn’t go the way you want it, just call it an attempt. An attempt thanks to which you discovered what doesn’t work and which will remind you to do things differently next time.

You could even call it an attempt before you start. It would be a great reminder of what life actually is. For the playful type it is a playground where they can express themselves freely and see what happens. For the over-thinker, it would be useful to call it a lab, where they can carry out “experiments” and advance by trial and error.

Are you ready for your next attempt?

P.S. The word attempt entails curiosity and the willingness to learn, therefore, another word for failure could be a “lesson” ?

Photo by Ian Kim on Unsplash

Why you need a life coach