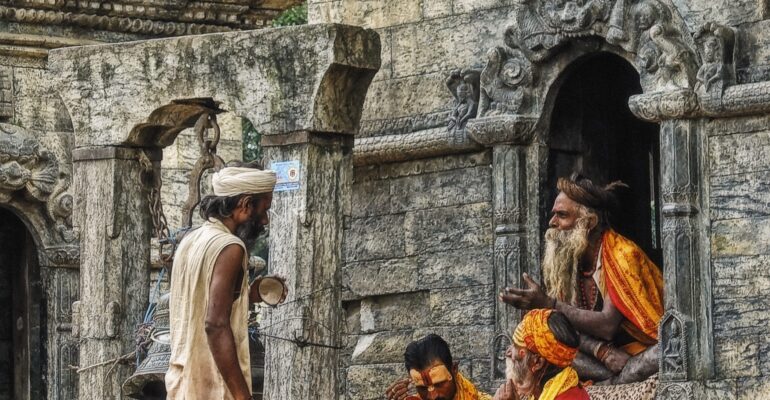 How many people (myself included at times) feel sad, angry or desperate because of things that happen (to us) in our everyday life? And how many of us get furious when others try to comfort us by saying “Everything happens for a reason!”?

It is only in retrospect that we get a glimpse the grand plan, the grand scheme of things; when we realize how masterfully orchestrated everything is so as to protect us, move us forward or teach us a valuable lesson or two that can help us evolve into the beings we are meant to be.

Despite this annoying habit, the emperor always had him by his side because he recognized that his advice and wisdom were very useful. So he never went anywhere without him, especially when he got out of the palace.

On a rainy day, the emperor decided to stay in the palace and spend the day being groomed. He had the women at his service give him a long bath and then he asked the barber of the palace to shave him and give him a manicure.

While the barber was clipping the emperor’s fingernails, lightning struck very near the palace. The clap of thunder was so loud that the barber, startled at the sudden loud noise, accidentally cut off the tip of the emperor’s little finger!

The emperor screamed in pain and raging with shouted to the guards “Quickly! Arrest him! Throw him to the dungeons!”. He turned to the barber and said “You miserable creature! How dare you scar me for life like that! You will rot in prison!”

The wise old man tried to calm down the emperor, who was beside himself with anger, by saying “Whatever happens to us is for our own good”. Nevertheless, this phrase had the exact opposite effect. It angered the emperor even more. “Enough with this nonsense!” he screamed. “I have been putting up with and your stupid motto all these years. Guards! Arrest him too and throw him in the dungeons! You foolish old man! Now you can repeat this phrase to yourself all your life as you too rot in prison!”

The next day the emperor decided to go hunting in the woods so as to relax and forget the incident that had upset him so much. It was the first time he had been anywhere outside the palace without the wise old man who had been his loyal counsellor and all these years and who followed him everywhere.

While alone in the woods, he was suddenly surrounded and captured by fierce warriors,-worshipers of the goddess Kali. They were very happy to find a victim to sacrifice to their goddess who they were celebrating that day.

So they dressed him with a special garment, anointed him with their holy oil and tied him to the altar.

The Emperor cried, screamed, pleaded, but to no avail. They were not going to let him go…

While the high priest was about to drive his knife through the emperor’s heart, to his terror, he realized that the victim was missing a member – the tip of his little finger. He cursed and spat but there was nothing he could do. He could not offer his goddess a victim who was not whole. He could not sacrifice someone who had a limb missing. He had to let the emperor go…

Still stunned, the Emperor quickly took to the palace realizing what had happened. The wise old man was right! Everything that happens to us is for our own good! Having the tip of his finger cut off by the barber worked to his favor. What at first appeared to have been an unfortunate accident, had actually saved his life! What was the significance of having the tip of his finger cut off in the face of the danger he had been through? He would rather have a limb missing than die a horrible death!

He then went to find the wise old man. He entered his cell, embraced him and said “My friend, forgive me for the evil that I have done to you. How blind a man I was! I was captured by worshippers of the goddess Kali and while they were ready to sacrifice me but when they saw the missing tip of my little finger they let me go! You were right my friend, “Whatever happens to us is for our own good! Please forgive me with my friend. From now on you will always be with me. My whole kingdom belongs to you.”

“But now tell me, please, what is the good thing that happened to you out of my throwing you in jail,?”

Without blinking, the elder looked at the emperor and said “Your excellence, had you not imprisoned me, I would have accompanied you, as always, when you went hunting in the woods this morning and I would have been captured along with you. And, as far as I know, I am not missing any limbs…!”